Sometimes, canines who live their whole lives either as a stray or in a puppy mill have difficulties adjusting to an environment where they feel loved and secure.

One example of such a dog is a 58-kilogram St. Bernard named Cosmo.

The 2.5-year-old dog lived with a breeder and did not know what it meant to have a loving home. Fortunately, he was surrendered in Hearts United for Animals, where the volunteers taught him, unconditional love.

Cosmo had no idea how to be a pet. He did not know how to climb stairs. He crammed himself into small spaces.

While most dogs are excited at the sight of a doggy treat, Cosmo did not even know what that was. He did not know that treats are meant to be a reward for being a good dog, so instead, he spat them out each time he received one.

The no-kill shelter located in Auburn, Nebraska, patiently taught Cosmo how to act like a real dog. The volunteers regularly walked Cosmo outdoors, experienced digging sand on his feet, and even allowed him to drink out of the toilet!

Cosmo’s new mom, Jayne, flew from New York to Nebraska to take Cosmo home. She shared that her husband loved looking at dog photos online. When they saw Cosmo, they knew they had to adopt him.

When Jayne arrived at the shelter, Cosmo immediately wagged his tail and leaned on to her new mom. Cosmo instantly laid down on the grass and allowed Jayne to give him belly rubs.

The next day, Jayne went back to the shelter to pick up Cosmo so that they could go back to New York. Although the dog was hesitant to get inside her his new mom’s car, he got in with the help of three people.

Cosmo received his well-deserved happy ending, thanks to Jayne who gave him a chance at a new life. He now lives with his fur-mom, fur-dad, two doggy brothers and sisters named Poppy and Grendel, two human siblings, and rabbits. 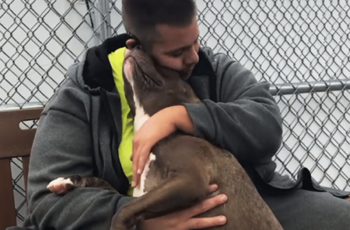 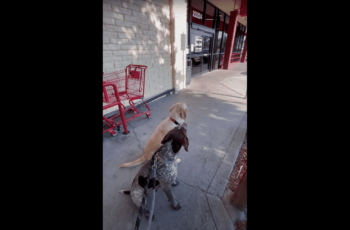 Dogs are popular for being loving, intuitive, and protective pets. …